Since the split with chimpanzees, and especially since the migrations that lead humans colonize almost every single place on Earth, we have been exposed to frequent environmental and social changes that have shaped our genomes through the action of natural selection. The availability of a comprehensive worldwide nucleotide variation data set from the 1000 Genomes Project (1000GP) provides the human lineage with an invaluable resource, allowing the testing of molecular population genetics hypotheses and eventually understanding the evolutionary dynamics of genetic variation in human populations.
PopHumanScan contains the most exhaustive characterization of human adaptive events. We have identified regions of the genome that have been subjected to either recent sweeps or recurrent selection since the split between our species and chimpanzees. Our genome-wide scan of selection includes 2,863 genomic regions showing signatures of positive selection based on three type of selection evidences, of which 1,453 (50,75%) overlap with genes and, intriguingly, 1,338 (46,73%) overlap introgressed haplotypes from Neanderthal or Denisova. Well-known examples of human genetic adaptation published elsewhere are included in the catalog, as well as hundreds of other interesting candidates that will require a more thoroughly analysis. To ease this analysis, the catalog facilitates comparisons of each signature of selection with empirical distributions of the corresponding DNA diversity metric across the human genome and in 22 non-admixed 1000GP populations, and structural and functional annotations of the region.

The side navigation bar gives you quick access to all the webpage functions. Catalog Redirects you to the catalog itself. Add a new event Allows the user to add a new entry. The user must be logged in to use this functionality. Contact us for registering. User Contains the main user configuration options: login, registration, password management. Contact Provides a contact form that allows the user to contact the developers.

The 1000 Genomes Project (1000GP) set out to provide the most comprehensive description of human genetic variation by applying whole-genome sequencing to a diverse set of individuals from populations. In the final phase of the project (Phase 3), the consortium published the reconstruction of the genomes of 2,504 individuals from 26 populations using a combination of low-coverage whole-genome sequencing, deep exome sequencing, and dense microarray genotyping (The 1000 Genomes Project Consortium 2015). With 84.7 million single nucleotide polymorphisms (SNPs), the resource is estimated to include >99% of SNP variants with a frequency of >1% for a variety of ancestries.
We have retrieved the population genomic data from PopHuman, which represents the most complete pipeline for population genomics analysis of the 1000GP data.
The 26 analyzed 1000GP populations (The 1000 Genomes Project Consortium 2015) are listed in the interactive map (Figure 1).

There are many methods and statistics to perform genome scans to detect local adaptation. In PopHumanScan, we have included selection tests based on the allele frequency spectrum and the levels of variability (Tajima’s D, Fu and Li’s D and F, Fay and Wu’s H); selection tests based on comparisons of polymorphism and divergence and its derived estimators (MKT, α); selection tests based on the linkage disequilibrium (iHS and XP-EHH) and selection tests based on population differentiation (FST) (Table 1). The combination of different measures are necessary for a complete description of the footprint that natural selection has left in the genome.
Tests are grouped in three categories depending on the signature type: Protein Changes (⬤, many millions of years), Site Frequency Spectrum (⬤, <250 kya) and Linkage Disequilibrium (⬤, <30 kya).
Because these statistics, except α (MKT), do not provide a formal significance test, significance was assessed by identifying the most extreme values in the empirical distribution of the statistics (i.e., considering values falling in the lower or higher 0.05% tail). The significance indicates that a locus in an outlier with respect to the rest of the genome.

The regions of the genome that departure from the neutrality expectations are further characterized with the structural and functional annotations of that particular region extracted from the UCSC.

PopHumanScan contain regions of the genome with footprints of the action of natural selection of the human evolution since the split with chimpanzees. The catalog facilitates comparisons of each signature of selection with empirical distributions of the corresponding DNA diversity metric across the human genome and among populations, as well as and structural and functional annotations of the region.

How can I filter regions of interest?

Imagine your research group is interested in protein coding genes that have experienced selective sweeps based on Linkage Disequilibrium signatures in European populations. To filter candidate regions, go to the PopHumanScan Catalog and move down to the page to find the Basic Filters. Click "Linkage Disequilibrium" under the Select a signature menu, "European" under the Select a population menu, and "Coding" under the Select a region type menu (Figure 2). Note that the table has reduced the number of entries to 102, and that the regions are not specific of Europeans, but also display the ones shared with other populations. The same occurs with the signature type, as a region can contain more than one type of signal involving different types.
Have a look at the filtered table (Figure 3): Values in each column can be sorted by clicking the header. Click XP-EHH to sort the values in descending order. The first region displayed is the one including the LCT gene that encodes lactase, the enzyme responsible for the digestion of the milk sugar lactose. Several mutations in this region have been subjected to positive selection in different human populations in the last 10k years since the introduction of agriculture.

Region and Genes description
Click the icon in the first row of the sorted table. A small section is displayed that specifies in which populations evidences of positive selection have been detected (Figure 4). In the selected example, there are four signals (Fu & Li's D, iHS, XP-EHH and α MKT) for several populations worldwide. Below, colored boxes indicate that the region overlaps several functional and structural features. Click See complete report of this region for the complete characterization.
The first section shows the structure and functional annotation of this region (see Structural and functional annotations) (Figure 5). In the example, the >95% of the region overlap haplotypes introgressed from Neanderthal.
In addition, some links to other databases describing that region are included: PopHuman, that complements the population genomics information, HaploReg, which allows the exploration of annotations of noncoding variants, and Ensembl, which allows the exploration of the linkage disequilibrium of the region.
The second part lists genes encoded in the region (Figure 6). For each encoded gene, it provides a short description of the gene along with Gene Ontology terms associated with it. It also includes eight different links to other databases to complement the information for this gene: Ensembl, NCBI, Uniprot, UCSC, Expression Atlas, OMIM, OpenTargets and HumanMine.
The third part contains cross-linked References to published articles that support the signal of adaptation found in the region. You must be registered and logged in to contribute in this area.

Recombination distribution
An Interactive graph shows the recombination values in 10kb non-overlapping windows along the corresponding chromosome in which the region is located. The specific location of the region is indicated with dashed vertical lines.

Statistics
Finally, boxplots show the distribution of each significant statistic in all the populations (Figure 7). Highlighted values correspond to those in the selected region, and those in red are outliers of the empirical distribution (P < 0.0005).

Using PopHuman to further characterize a region
PopHuman can be used as a complementary exploratory tool of the region. Clicking in the PopHuman button will redirect you to the browser. Additional tracks can be activated: (i) frequency-based nucleotide variation; (ii) divergence-based metrics; (iii) linkage disequilibrium; (iv) recombination; (v) selection tests based on the Site Frequency Spectrum (SFS) and/or variability and (vi) selection tests based on the MKT.


How can I contribute?

If you have detected positive selection in a region that is not present in the database, you can add it using the tool in the Edit page (Figure 8). The tool consists of a simple form where you need to define the coordinates of the region, the gene (if any) overlapping the region, and the value(s) of the statistics you measured, specifying the population of study. If you found more than one significant statistic or measured it in more than one population, you can click on the button. Clicking will remove the line. Finally, specify the data source you used.
To use this tool, you must be logged in. If you do not have an account, contact us for registering in the site. The introduced data will be subjected to manual curation and will be clearly labelled with your ID.

You can manually enter papers supporting a region already present in the catalog. Enter the report of the region and add PubMed IDs in the corresponding section (Figure 9).

PopHumanScan icon made by Freepik from flaticon and modified by PopHumanScan.uab.cat.
Cookies banner from Bootstrap-Cookie-Alert.

Feel free to contact us through the contact form in case you have questions about PopHumanScan or experience any technical problem. Suggestions to improve our site are welcomed! 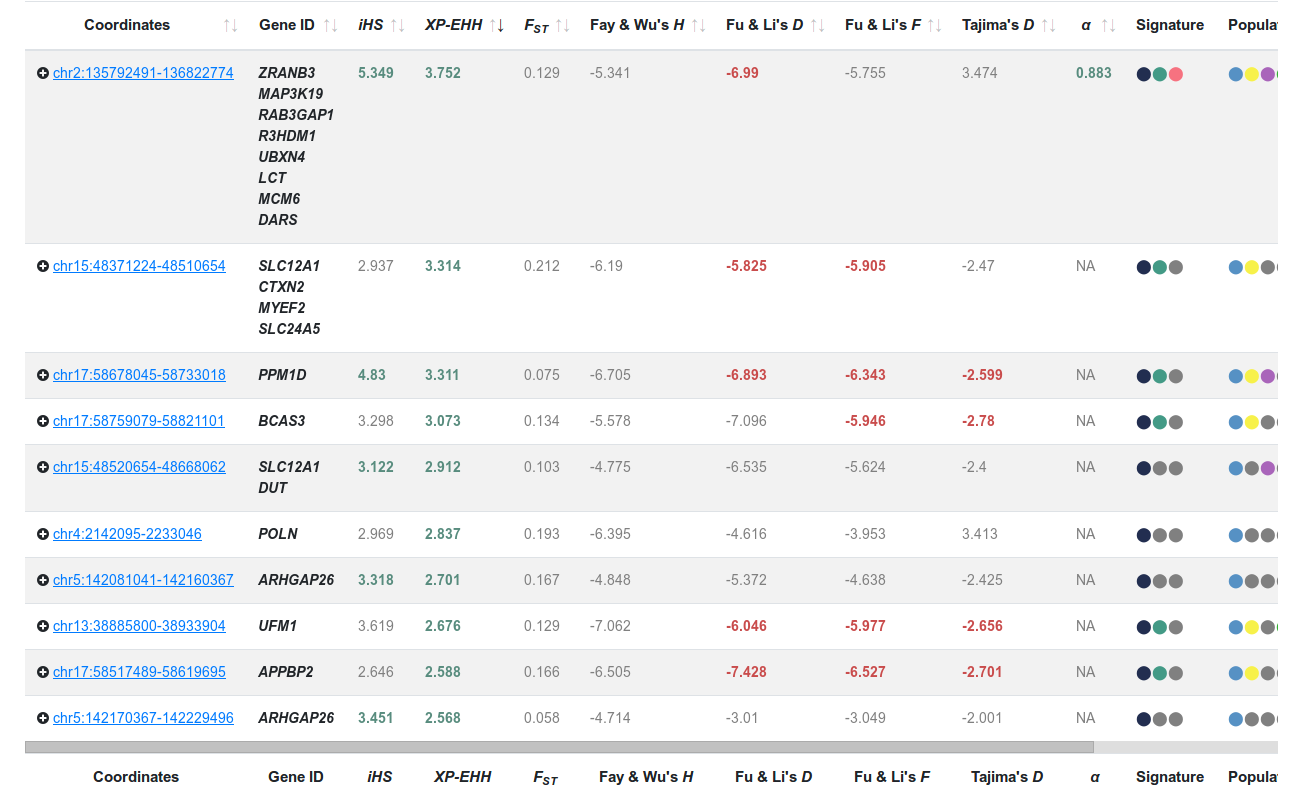 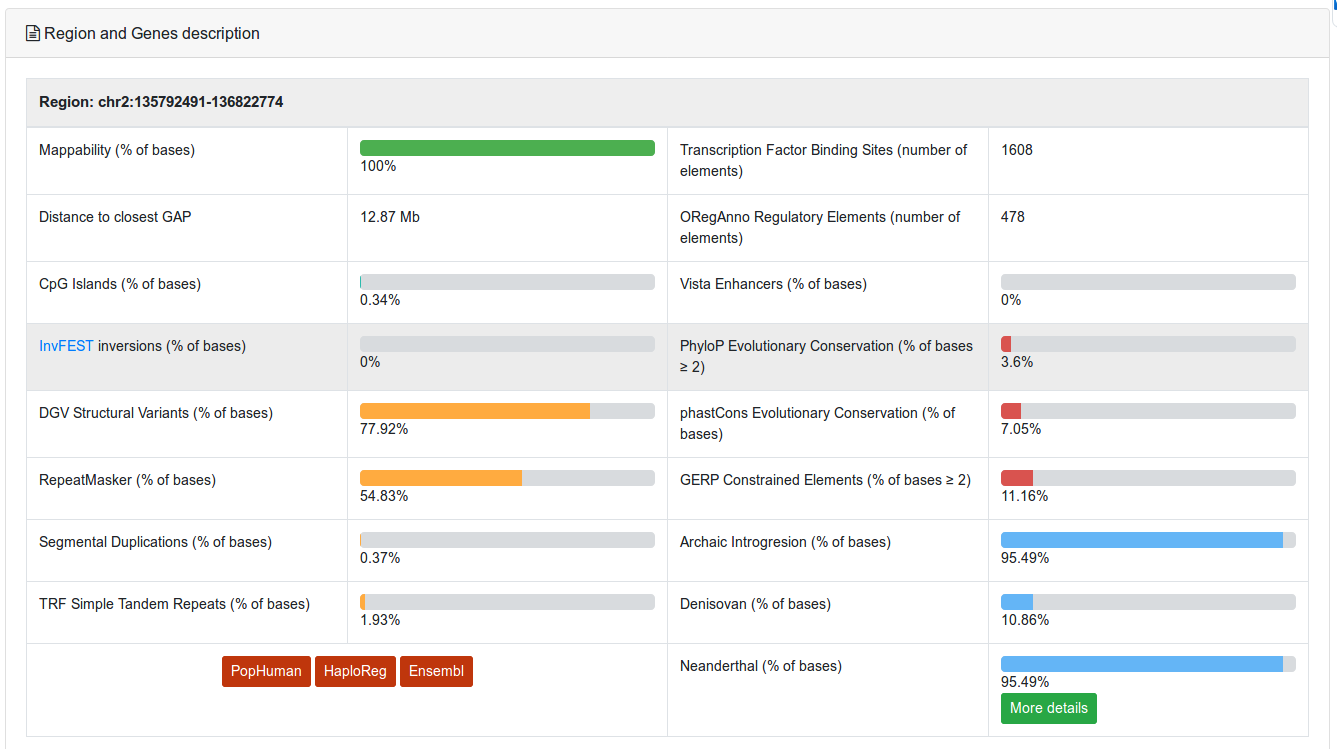 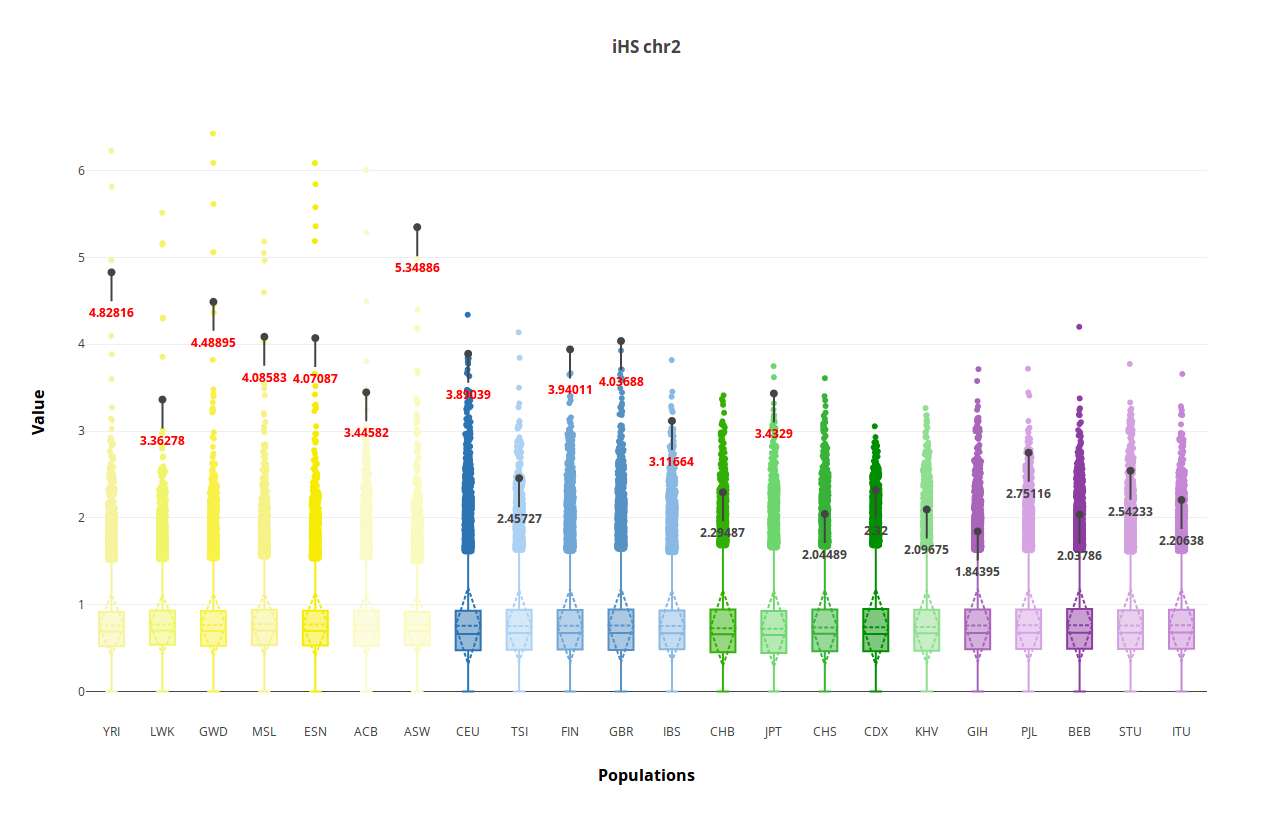 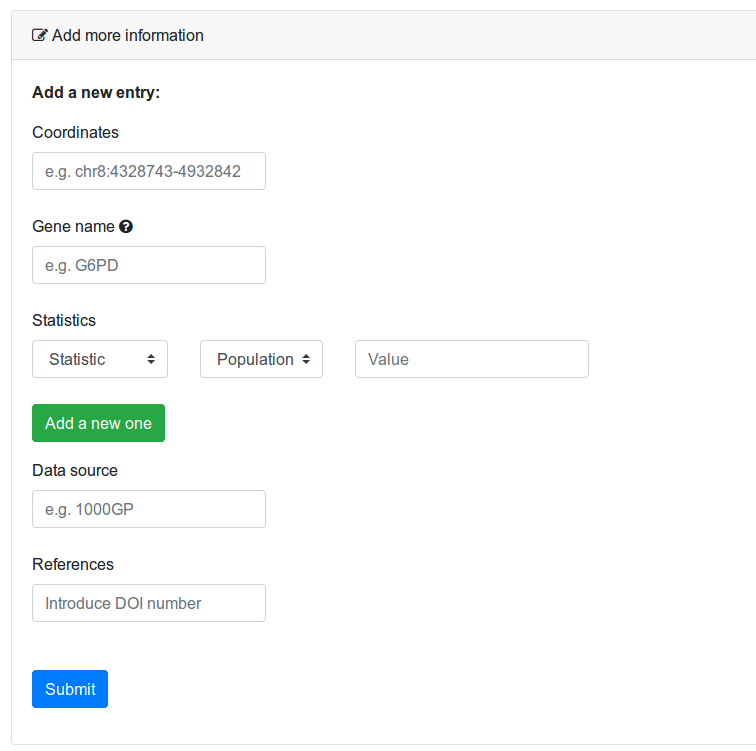 Select "Logout" below if you are ready to end your current session.
Logout